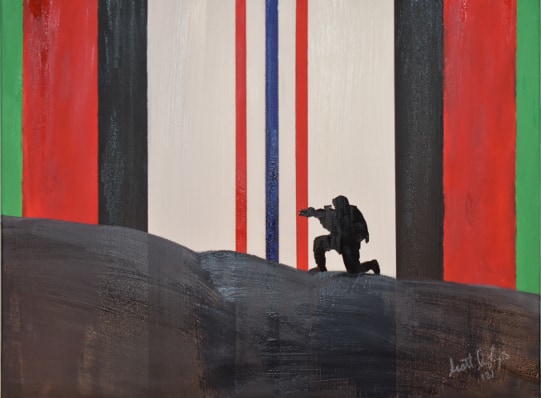 What's The Story Behind This Artwork?

The background of this painting is designed to represent the Afghanistan Campaign Medal ribbon. This medal is awarded to any member of the United States military who has performed duty within the borders of Afghanistan (or its airspace) for a period of thirty consecutive days or sixty non-consecutive days. Personnel who have been engaged in combat with an enemy force, or personnel who have been wounded in combat within Afghanistan, may receive the ACM regardless of the number of days spent within the country. The medal is also awarded posthumously to any service member who dies in the line of duty within Afghanistan, including from non-combat injuries.

The foreground of this painting is designed with a soldier kneeling on a hill with his weapon raised in a security posture. The hill the soldier is on represents one of the many mountains found throughout Afghanistan.

The original artwork can be yours, or it is also available as a print.

What's the difference? Glad you asked...

Get a Framed Print